Voters on NFL.com have made their choice. Quarterback T.J. Yates of the Houston Texans is the NFL Rookie of the Week for games played on Dec. 8-12, the NFL announced today.

Yates completed 26-of-44 passes for 300 yards, two touchdowns and an interception in the Texans' 20-19 win over the Cincinnati Bengals. Yates also added five carries for 36 rushing yards, and threw for the game-winning touchdown with only two seconds remaining in the game. The win helped Houston secure its first playoff berth in franchise history.

Yates was selected from among five finalists through fan votes on NFL.com/rookies. The other finalists were wide receiver Doug Baldwin of the Seattle Seahawks, wide receiver Julio Jones of the Atlanta Falcons, quarterback Jake Locker of the Tennessee Titans and wide receiver Titus Young of the Detroit Lions

After the regular season, five players will be nominated for NFL Rookie of the Year honors. Fans can vote for the winner on NFL.com/rookies throughout the month of January. The winner will be announced at a press conference at Super Bowl XLVI in Indianapolis. 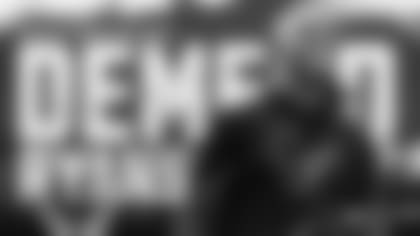 The Houston Texans have hired DeMeco Ryans as the team's sixth head coach in franchise history.

Former Houston Texans WR Andre Johnson has been named a finalist for the Pro Football Hall of Fame for the second consecutive year.

Texans at Titans postponed one hour to 1 p.m. CT

Due to the extreme weather and power outages affecting Nashville, kickoff for today's game has been postponed one hour to 1 p.m. CT.

The Houston Texans announced today that Coach Cameron Campbell is the team's recipient for the 2022 Inspire Change Changemaker Award.

The Houston Texans, ConocoPhillips, Coca-Cola Southwest Beverages and Ashley awarded $400,000 through the Inspire Change Grant Fund to 15 local nonprofits and educational programs working to make a difference in the Houston community.

The Houston Texans announced today that linebacker Christian Kirksey is the team's nominee for the 2022 Walter Payton NFL Man of the Year Award.

The Houston Texans made an injury report update leading into Tennessee.

A statement from Chair and CEO Cal McNair

The Houston Texans are offering fans the opportunity to exchange select former player jerseys for 44% off a new jersey throughout the team's Bye Week.